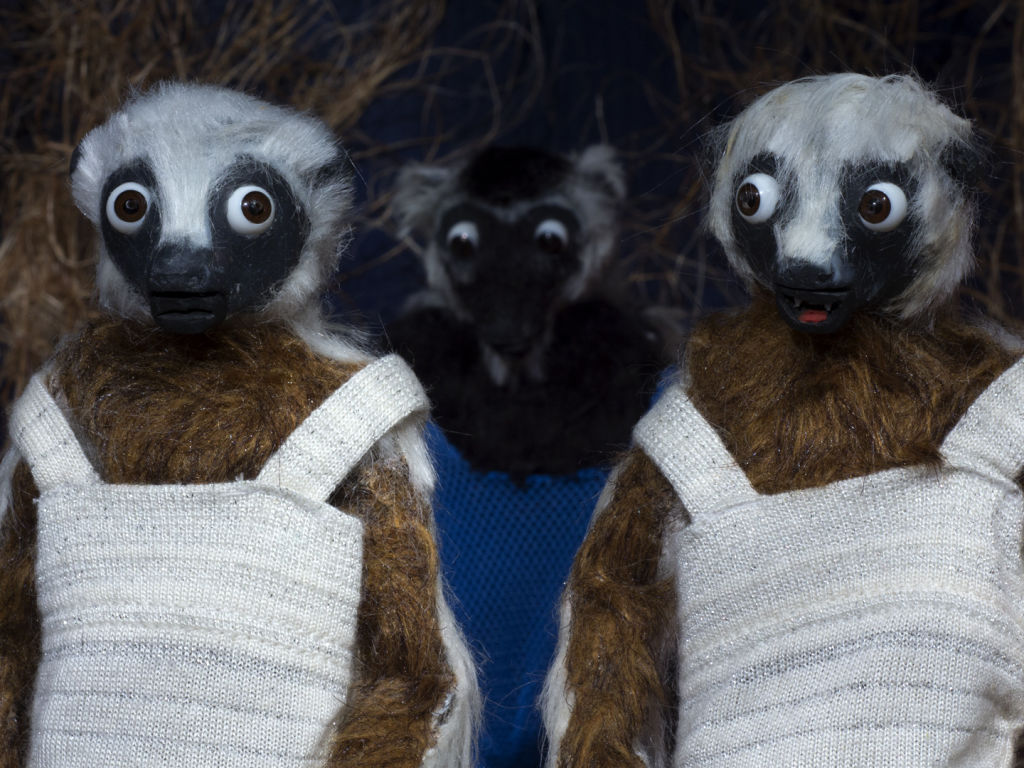 Lemurs are an interesting creature. A native primate of Madagascar, the lemur has what’s called a “Toilet Claw” used for grooming. The lemur’s tail is longer than they are and is used for balance and communication within the species. Lemurs are also used as a poignant metaphor for cultural atrophy in Clement Hil Goldberg’s satire, Our Future Ends.

The work oscillates between installation, projection, dance and theater as a fabulous choreography of queer live performance and film. Conceptually, Our Future Ends parallels the near extinction of Madagascan primates to an imagined queer prehistory.

I had the chance to chat with Clement about queer identity and gentrification, wildlife, and how these themes culminate in their project.

Justin Ebrahemi: You’ve produced a few successful interdisciplinary projects before Our Future Ends, including Valencia and The Deer Inbetween. How does Our Future Ends differ from these projects?

Clement Hil Goldberg: Our Future Ends brings live performance and visual arts installation to the mix. I wanted to cultivate the theatrical arrangement that exists between stop motion animation, live performance and visual arts. I like standalone pieces that join to form a more complicated whole so that hasn’t changed more than medium.  My interest is informed by queer culture and how we are all standalone bodies but when the community comes together there is a larger lineage and context that complicates any standalone narrative.  The voice actors for the stop motion lemurs (Brontez Purnell, Maryam Farnaz Rostami, Heather María Ács) are also Lemurians in the live performance. The performance will include dance and musical numbers that Larry Arrington will choreograph. Live theatrical dialogue will also build out the storyline. I will continue working with many of the incredibly talented artists that I collaborated with on Valencia and The Deer Inbetween but this time the live stage offers all of us a chance to work together in a new way.

JE: Sounds fascinating. And familiar to your earlier work. Your past projects share similar allegories of endangered animals and queer identities, metaphors you construct with poignant scientific research and social awareness. The parable constructed in your upcoming project, Our Future Ends, incites a parallel extinction of Lemurs with the cultural loss of queer and trans spaces. Could you speak more about this allegory?

CHG: You can’t live in San Francisco and easily ignore the rampant displacement that has been happening.  It creates an atmosphere of loss and replacement. I don’t know what it is to be a lemur and lose 90% of your forest. I don’t know what it is to be part of a matriarchal society, a species that dates back 60 million years and up until 2,000 years ago enjoyed a peaceful habitat until humans came along.  I do know what it is like to live in cities where rents go up, friends move away and favorite community gathering places are forced to close their doors.   It’s a story that’s been ongoing but is so palpable in this city that I wanted to look at it in allegorical form.

JE: But why lemurs? What inspired you to draw this metaphor from lemurs and not any other species?

CHG: The root of lemur and Lemurian is lemure or ghost. That felt right. Also, their displacement story, a home that can’t be returned to seemed prescient for all of us. Especially since they are primates. I was interested in creating a piece about a group of endangered species, and the lemurs being researched at the Duke Lemur Center stood out.  Especially when you had different species grouped together and there would be only one of a certain kind. It felt queer to me.

JE: What I appreciate in this project is that the parallel is reciprocal. Lemurs are not only used as a metaphor of queer and trans cultural atrophy, but queer identities are conversely exploring a very real threat to extinction to wildlife. How do you construct this metaphor in Our Future Ends?

CHG: Queer culture is so vital. It’s always under threat of disappearance. When the Pulse shooting happened it hit me in a visceral way, there was a shared cultural response that it was like a holy site had been hit. Queer bars have been the most formative spaces for me on an artistic and personal level. I’m not alone in that. So for example, the STUD Collective in San Francisco is creating a wild life preserve or sanctuary by saving the STUD.

JE: That shared devaluation of wildlife and wild life is very real and harrowing, and you’ve done some research into lemur habitats to make the former threat tangible. Can you speak about your research process?

CHG: I read books like Lords & Lemurs and researched via the internet. I wish I could have gone to Madagascar to have first hand engagement with lemur habitats, but I did have the most remarkable opportunity to record lemurs at the Duke Lemur Center.  I respect that at the heart of what the Lemur Center does is a hope to someday return lemurs to the wild in Madagascar.  They have in the past, but it isn’t very likely in the present or near future. I found it very difficult not to project a carceral state onto seeing how they live there, but their lemurs are given incredible care only restricted by budget.  I got to interview some of the staff, field questions and gain a deeper understanding of captive breeding programs.

The Duke Lemur Center was incredibly generous and I am truly grateful. Getting to film the lemurs when they were free ranging in their forest enclosures was one of the best experiences in my life.  While I was recording I held in mind that they were improvisational performers and we were making a collaborative art film.

JE: How does Lemuria serve as the foundation for an imagined queer and trans story?

CHG: In researching Lemuria, I read anti-colonial historian Dr. Sumathi Ramaswamy’s book The Lost Land of Lemuria, Fabulous Geographies, Catastrophic Histories. The book opens with the same quote from Oscar Wilde as José Muñoz’s book Cruising Utopia: the Then and There of Queer Futurity. It was like these ideas were always in conversation and I was just tuning in. It’s about grief and loss and collective imagination. In my early research about Lemuria, they were framed as psychic hermaphrodites and I took it in this literal woo woo way that excited me, like trans and queer ancestors that were telepathic.  And they worked with crystals – these were our queer prehistoric psychic beings!

Come to find very late in the course of my project that psychic hermaphrodite was a pathological term from Victorian science that meant gay, like a hermaphroditic psyche – not gifted telepathy or psychics. It was also at this time in history that the binary became enforced despite the spectrum of genitals that the scientists had encountered in their research. They drew numerical boundaries that were the basis for intersex surgeries to come.

I can go on and I will in the form of a show in October, but I’ll just say that I took all of this as a kind of push to reimagine the ancient Lemurians as a site of prehistoric queer culture and connection.

JE: The lemurs are voiced by queer and trans artists. How do you think working with these artists brings life to the story?

CHG: I was thinking about artists I would like to be in an experimental rehab with to discuss and process our inevitable extinction.  The voice cast is Brontez Purnell, Maryam Farnaz Rostami, Heather María Ács, Xandra Ibarra, Zackary Drucker, Ben McCoy, Silas Howard and Siobhan Aluvalot. I found so much resilience and humor in their voices while I was animating. They gave me life so I am sure they will bring life to the story.