Reflecting on Skywatchers: I GOT A TRUTH TO TELL 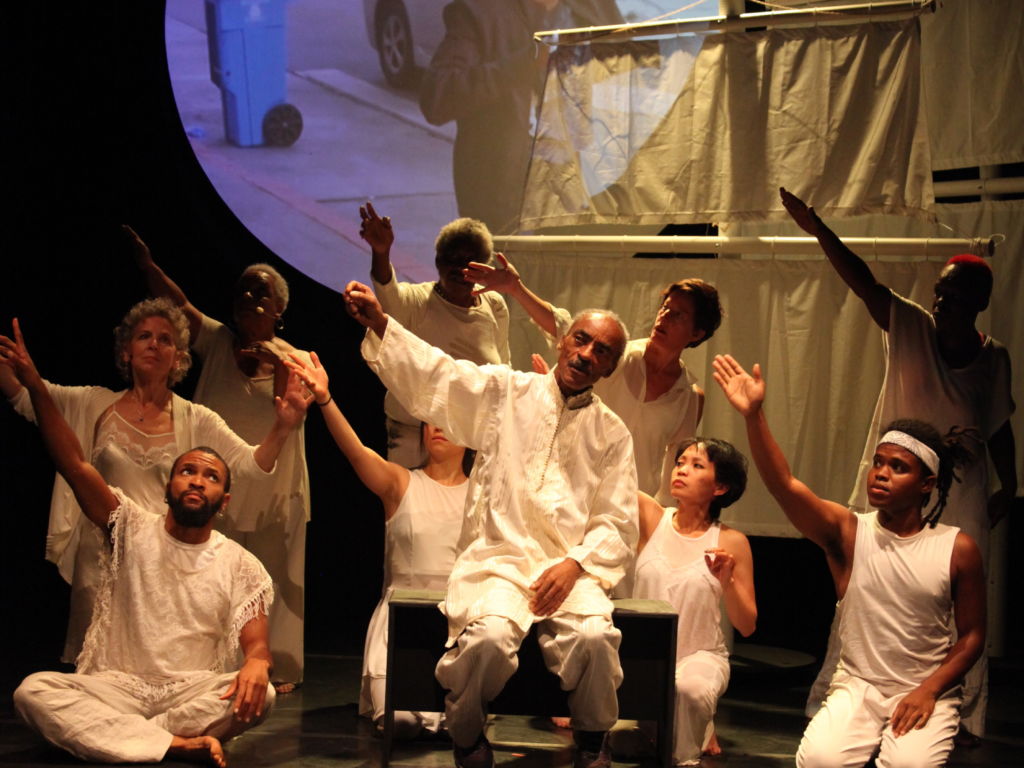 Reflecting on Skywatchers: I GOT A TRUTH TO TELL

A little over a year ago, ABD’s Artistic Director Anne Bluethenthal opened one of our
weekly Skywatchers meetings by asking: Who has your back? And what does that look like? It was early fall, a distressing time for many as 45’s campaign gained traction (little did we know…), but there was a tinge of hopefulness in Anne’s prompt. What possibilities exist when we, the people, choose the radical act of having each other’s backs in the face of the powers that would sooner have us alienate one another? But as we went around the circle of Skywatchers the refrain was consistent and unequivocal: “ain’t nobody got my back but me.”

About the same time, we were starting work on a new piece—another hopeful endeavor—that would use performance to make the voices of people living in supportive housing heard in planning, decision and policy-making conversations about Supportive Housing. It would be called, At the Table.

The two pieces intersected two weeks ago when Skywatchers: I GOT A TRUTH TO TELL premiered to sold-out audiences at CounterPulse (Thanks to CP for co-producing IGATTT!). The simple question of who has your back led the ensemble into a year of investigations of our ancestry; of the experience of not being believed (over, and over, and over…); of cultural gaslighting of poor people and people of color; of the way the legacy of the slave ship still exists as the elephant in America’s living room, an obstacle that folks in the TL are having to climb over every day just to survive.

The result brought the voices and stories of those who would be silenced into high relief and a resounding chorus to demand: I want to get off this ship. Woven throughout the piece were ensemble members’ stories about the sub-standard conditions of supportive housing in the TL, and the finale transformed our set into a table that audience members joined us at to share reflections and to ask performers “How can we help make change?”

And even as powerful as it was to see these themes come together on stage, what I

marveled at was the reminder of how, at its best, live performance isn’t an end product at all, but part of a larger process—of coming together, building relationships, and having each other’s backs in perhaps the most profound way: by being witness, seeing and believing each others’ truths in a world that would call us crazy.

It brought me back to one of the core beliefs of Skywatchers: that relationships are the first site of social change and that large-scale transformation begins with intimate, interpersonal exchange.

This stood out to me at so many points throughout the evening. The audience (itself a diverse crowd made up of equal parts TL residents and others from around the Bay Area) kicked off the evening with a processional around CounterPulse’s block, singing songs led by vocalist Melanie DeMore, and I was reminded of Brian Stevenson’s teaching that we must get proximal to our city, state, country’s most challenging issues, rather than keeping them at arms’ length. I reflected on the potential of performance to help us do that in a joyful, reciprocal way.

The majority of audience members stayed in the hot theater for nearly an hour after theperformance to hear more from ensemble members, to share their own similar stories, to say thank you, to offer their help, and I thought about how this performance could be seen as an excuse to get us all in one room together—to get to know each other and to put our heads together on how to have the backs of some of our city’s most vulnerable residents. A meticulously crafted bait-and- switch, if you will.

But most of all I marveled at the product-as- process when TL residents in the audience came and joined the performers on stage—that easily becoming part of the Skywatchers community, taking their seat at the table.

Over the next year and a half, Skywatchers will be working to leverage performance across civic and artistic realms to include the voices of homeless and formerly homeless residents in the city-wide conversation around housing issues. If you would like to know more or be involved, join the Skywatchers mailing list or email clara@abdproductions.org.