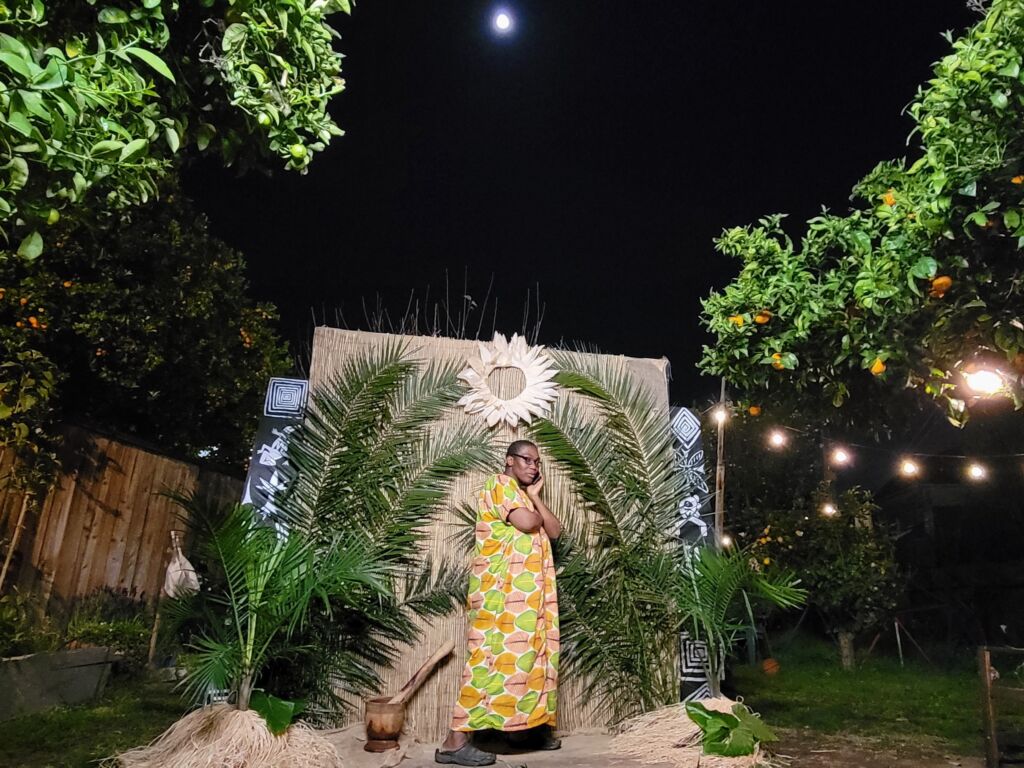 Nkeiruka Oruche on ‘Mixtape of the Dead & Gone’, Proverbial Performance, and Igbo Practices of Mourning

Nkeiruka Oruche(she/her) is a cultural organizer, producer and multidisciplinary artist, specializing in Pan Afro-Urban culture and its intersections with personal identity, public wealth and sociopolitical action. She’s one of CounterPuse’s 2022 ARC Edge artists and, in collaboration with Gbedu Town Radio, will debut ‘Mixtape of the Dead & Gone #1’- Ahamefula alongside Audrey Johnson’s [and then we must be] Thursday through Saturday, June 2-4 & 9-11, 2022. Gbedu Town Radio and Dance Mission will also present The Art Of Performance Afro Dance Tour with Sayrah on April 26, 2022, 6-8pm PT.

Tickets for ARCE are available now!

Tickets for SayRah‘s The Art of Performance Afro Dance are available now!

Every track must come to an end, but you don’t have to…

If your final journey is to the land of ancestors, what would you leave behind? What would you take with you?

When Ahamefula is faced with these questions, posed by #7, a Messenger on the ‘Onye Ozi’ Ancestor app, sent to collect them, their first instinct is to run, until #7 offers Ahamefula a chance not to be forgotten. Afro Urban Society & CounterPulse present ‘Mixtape of the Dead & Gone #1’, a shit-just-got-real Afro-Urban dance-theater tale exploring the limits of stunting and reality, vibes and inshallah, legacy, heartbreak, and acceptance.

Ach Kabal: Could you talk a little bit about ‘Obi gbawara’m//My Heart Shattered or What happens after I die?’ aka ‘OGB’. What can people expect from the performance?

Nkeiruka Oruche: OGB is the overarching project researching and exploring Ndi Igbo’s death and grief practices; what aspects of it we have for ourselves now, and what we can bring forward. One of the things that got articulated for me through the research process is songs for the dead; elegical songs and poems that are part of the traditional Igbo practice of mourning. These practices are something that I can tangibly bring back, and offer to myself and my communities.

What has developed from this is the creation of the ‘Mixtape of the Dead & Gone’, a series of performance installations inspired by Igbo elegical songs and poetry.  The first section of the mixtape, is # 1-Ahamefula, a live dance, musical, theatrical performance that captures the moments after Ahamefula (‘may my name never be forgotten’) dies in their home and their struggles with what happens next.

You’ll see a cast of about fifteen performers. There’s dancing, singing, and spoken word. It’s gonna be funny, and reflective. I think it’s interesting when you talk about death it’s often scary, sad, and overwhelming. But what I’m learning from this, especially from traditional Igbo culture, is that we have moved further from an understanding that death is a part of life. We’ve mystified it so much that we don’t talk about it. We don’t normalize it the same way we do with birth, like “Oh, when are you gonna have a baby?”, or “Oh, that baby! Oh my God, they’re coming!” But death is the same thing, it’s gonna happen!

Traditionally, in Igbo cultures, we have had death as part of the conversation. We understand that life doesn’t end when you die. Ancestors are part of our life connection and day-to-day practice. This is the context. I’m trying to bring back the practice of normalizing the performance of death and grief.

AK: The overarching project contains a phrase translated between Igbo and English, is something being translated by this work, or is translation an aspect of the work or something that you’re thinking about?

NO: Yeah, because the onus for this is understanding. I’m an Igbo person. I’m also a fourth-generation colonized, christianized, capitalized, westernized Igbo. Even though I’m an Igbo person, it’s not my first language, I’m not fluent. It’s something that feels hard for me to pass on, and so there is a lot of learning and discovering of things that were never revealed to me or to most of us, really. I’m digging into lost and buried practices that have been usurped by the erasure of westernization. These are not even things that I can ask my mother or my grandma about. I’m needing to translate these concepts for myself as I’m digging and reading and reaching practitioners who still hold these traditions. I’m also connecting what I’m learning to ways that Igbos are practicing today with all the different contexts and belief systems and class and geography and locales of people of African descent globally. There’s a translation in “Here’s what I’m learning about. How did Igbos do this or how do they do this today? What does that look like?  How do you say this? How do you feel this? How do you express this?”

There’s also the cognition that ‘Igbo’ is a catch-all term for different communities in the Southeast of present-day Nigeria, it isn’t a monolith. I might ask another Igbo person “how y’all do this?” and each clan is really just gonna have their own way. I found some repositories of Igbo dirges and lament poems, and even though I can somewhat read basic (central) Igbo, I couldn’t understand these at all because it was in a specific dialect unfamiliar to me in written form.

Also, there’s the reality that some things just can’t be translated, in the ways we are accustomed to. Igbos are oral people who use proverbs to help impart ideas, beliefs. and concepts. There’s a quote from Chinua Achebe’s ‘Things Fall Apart’: “Proverbs are the palm oil with which words are eaten”. Proverbs transcend pedestrian conversation, and help us understand things by tapping into multiple senses, including ancestral wisdom and life experience.

And so with that, going back to the piece, my work is in essence ‘Proverbial Performance’. There are layers of translation in terms of what you’re going to see visually, the set, the costumes, our songs, our movement vocabulary (there’s an Egedege Igbo traditional dance piece where we pair traditional movements and mirror it with Afro-urban movements from the Diaspora). Some of it you may not intellectually understand, but you’ll feel it in your soul. It will buzz you in the knee cap. It will make an eyelash quiver.

AK: The work touches on the relationship between grief, ritual, and liberation. Where do you see the role of performance in that relationship?

NO: I think for me there are two areas, one is the practice of death and grief performance that Igbos have, and the other is me using performance as a device to carry the culture forward.

Like I mentioned earlier, there’s a lot around the performance of birth and birthing from the obvious visual of a pregnant person, and the attention they get, to the medical interventions, and different celebrations that happen. Whereas with death, it feels like we’re quickly heading to ‘stop crying’ as all that is left. Whereas, traditionally, Igbo people have intricate rites, processes and protocols, and outwardly visual markers of death and mourning. There’s announcements made, there are mourning periods for different members of the family, there are clothing that you wear, or periods where you don’t go out. These were inbuilt within the society: a real acknowledgement of death and the effect of it in the lives of those left.

In contrast to what we face today: where you have to explain to your boss and negotiate bereavement, or really face loss of employment or wages. You’re just kind of left on your own. There’s no social resources to bury someone. Why is it so fucking expensive to die? What the fuck? We know everybody has to die! Why do we have to deal with not just the grief and loss of the person, but the cost and the confusion.

Still, Igbos operate in a social aid format. I’ve grown up to understand that if I hear that someone in my family or community dies, automatically I’m contributing funds to support the transition.  I don’t need the prompt of a donation platform to help, it is just common practice. So-and-so died, send money. So my offering back to my people is re-installing these dirges, dances and visuals acknowledging the practice of art and performance in grief that was there traditionally for Igbos.

The second element for me, is understanding and wielding the power that seeing a piece of performance art has in changing and shifting belief, consciousness and life practice. A performance has been life changing for me, many times. Orgasms I’ve gotten from seeing an evocative piece of work, that is performance-based. Performance creates an accessibility to ideas that is different than if it was literary, visual, or another form. And as a cultural creative, I want to do this, create a moment, a sound, a glance that will give someone a life-changing orgasm.

AK: I’m so excited for the open rehearsal workshop with Sayrah! What are you hoping will come out of your cast and the public meeting and moving together in advance of the performances? Could you talk a little bit about the workshop in general?

NO: Sayrah is one of the leading dancers and choreographers of Contemporary Afro Dance and the Nigerian Afrobeats scene. She brings an understanding of different styles and vocabulary into the Afro pop canon. Our Gbedu Town Radio ensemble is creating and presenting within a Pan-Afro urban context, many of which intersect with what SayRah does. We have some Turf dancers. Some Afrobeats dancers. Some Southern Afropop dancers. Some Lyrical. Everybody has their own niche. So we’re hoping that our group can really work through this performance reinforced by the approach that Sayrah is bringing in this one-off intensive. This is also a chance for our ensemble to share our production season with the community, in addition to other activities like Cyphers, street performance pop-ups, events, and dance videos.

AK: Is there anything else people should know?

NO: People should come and know that it’s not a watch thing, it’s a be thing.