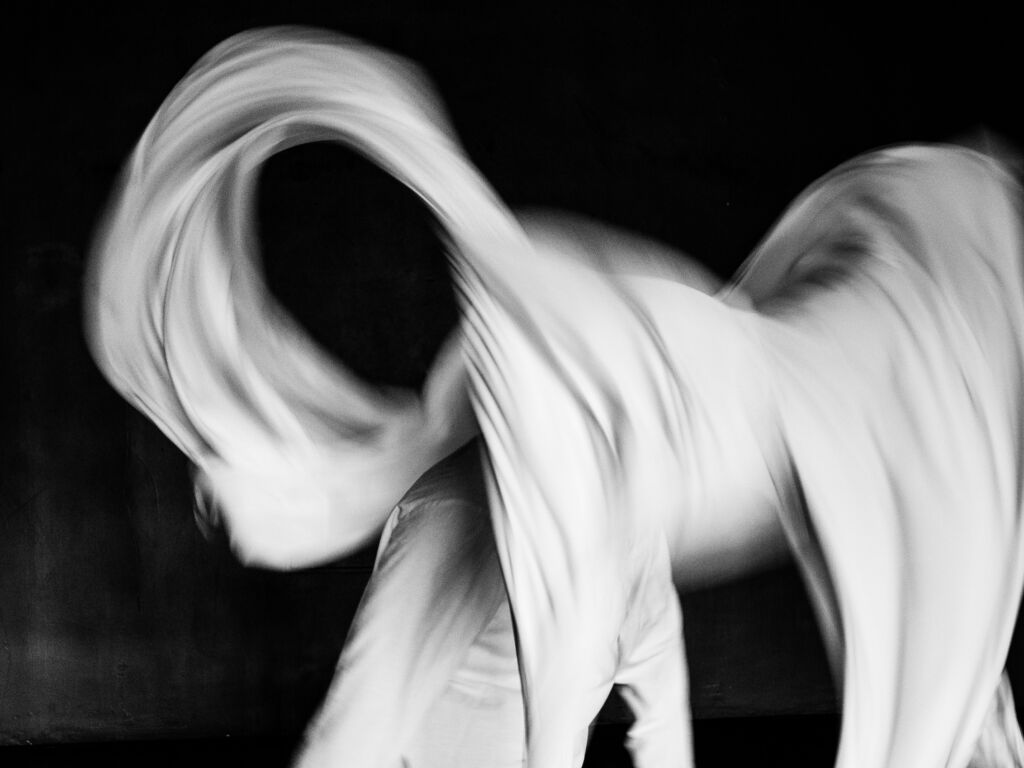 Nol Simonse and Jim Cave will be sharing a devised theater piece that uses dreams,  mythology, séances, paganism, kink, and ghost stories as inspiration, and circles around  questions dealing with our death and mortality. What is the obsessive nature of death?  What is the romanticized nature of death? How do we observe death? How do we  experience death? How do we move through death, and the fear that comes with it? The  anxiety of mortality, and the fascination of the unknown beyond are core themes. This  work, with a sound score by artist Emma Tome, includes a dead body, a ghost, a  medium, some Egyptian gods, and a carpenter. It is absurdist, unsettling, and  meditative. It faces towards members of the Bay Area theater, dance, Jewish, and queer  communities.

Christy Funsch’s latest sextet, kid subjunctive, embodies collective futurism. Framed  as a series of episodes in answer to the questions “what is desired?” and “what is  possible?” kid subjunctive centers performer agency in a physical adventure of  accountability. Each episode of the work holds several potential options for performers  to enact in the moment, and each individual choice reverberates among the rest of the  ensemble. kid subjunctive is accompanied by a score generated from live performer  vocalizations and recorded sounds.

kid subjunctive’s movement vocabularies, distinct for each performer, are built from the  performers’ assembled states of being. Each state of being depends on and is enlivened  by vocalizations, and, sometimes, text. Instead of narrative text, however, I am directing  a practice of “sounding” in kid subjunctive that harnesses the physical effort of  attempting to speak: one prompt is to take a breath, say our name, and ask for what we want.

kid subjunctive arises from what I call “the residue of unfulfilled desires” that were  generated in my 2021 12-hour durational performance work EPOCH. Some of the  EPOCH residue is a tenderness I hold for durational time as a construct. The literary  scholar Saidiya Hartman describes the subjunctive clause as a “grammatical mood that  expresses doubts, wishes and possibilities.” I came to this definition via contemporary  fiction author Jean Chen Ho. According to Ho, “to live in the subjunctive is a manner of  seeing the past not as a fixed story but as one that the present continuously acts upon.  The present is what determines the past, not the other way around. I can write it any  way I choose, at my own pace. That’s another thing about the subjunctive: There’s  always enough time there. All the time you could want, and need.” I find, in these  scholars’ imaginative definitions, reassurance and possibility. Kid will not be a

durational work like EPOCH, and yet its time construct will be similarly, meticulously  sculpted.

Nol Simonse grew up in Washington, D.C., and trained at the Boston Conservatory of  Music. He moved to San Francisco in 1997 and is a founding member of Kunst-Stoff,  (artistic directors Tomi Paasonen and Yannis Adoniou) who he danced with for ten  years. Nol has worked with Janice Garrett since the inception of her company, Janice  Garrett and Dancers, in 2001, and continued with her and her partner, Charles Moulton,  when they formed Garrett+Moulton Productions. He has danced, toured and taught  with Sean Dorsey Dance since 2007. He is also a longtime collaborator/performer of Sue  Roginski, Eric Kupers, Christy Funsch, Stephen Pelton, and Kara Davis. Nol has worked  with many Bay Area artists, including Mark Foehringer, Mary Armentrout, Todd  Courage, Della Davidson, ACT director Carey Perloff and choreographer Val Caniparoli.  Nol was awarded an Isadora Duncan Bay Area Dance Award in 2011 for individual  performance “for his entire season, including A.C.T.’s The Tosca Project”, and in 2009  Nol received a GOLDIE for dance (Guardian Outstanding Local Discovery) from Rita  Felciano, who has called Nol “an intense artist”, and “a marvel of a dancer”. Nol was the  first person to win Luna Dance Institute’s Choreofund prize, and Dance Teacher  Magazine published an interview with him in the September, 2016 issue. Nol currently  teaches modern at the Alonzo King’s Lines Dance Center, and Shawl-Anderson Dance  Center. He has taught choreography, repertory, and performance workshops for adults  and teens, and has made dances for Diablo Ballet, the Lines summer program, students  at USF, Shawl-Anderson Youth Ensemble, ODC’s Dance Jam, and Dance Mission  Theater’s Grrrl Brigade. Nol produced eight seasons of ‘Shared Space’ with Todd Eckert  at Dance Mission Theater from 2007-2016 and has had residencies at Dance Mission  and Studio 210. Nol was one of the 25 nominated artists to create a dance for the 25th  anniversary season of the West Wave Dance Festival, and was a mentee of Margaret  Jenkins in 2017 for her CHIME Program.

Since forming Funsch Dance in 2002, Christy Funsch has had her work presented in  Amsterdam, Chicago, London, Nebraska, New York, Phoenix, Portland, Toronto, Virginia, and  throughout California. She has newly relocated to New York; while in San Francisco, Christy  self-produced thirteen full-length evenings of new work. Her choreographic trajectory has  evolved over time from emotionally-driven narrative pieces (Daisy, 2002), to genre-blending  theatrical works (Boy Blue, 2004; To Mifune, 2007), to somatic improvisation (Box Elder,  2009), to an emergent premise process wherein questions drive the creative process (This is the  Girl, 2014; Dissolver, 2015). Christy continues to enjoy rich collaborative partnerships with Nol  Simonse, Julie Mayo, and Peiling Kao. She has also worked with Susan Rethorst, Stephen  Pelton, Katie Faulkner, Sue Roginski and many others. Christy holds an MFA in Performance  and Choreography from Arizona State University where she studied with Daniel Nagrin. She  also holds a Movement Analysis Certification through New York’s Laban Bartenieff Institute for  Movement Studies. She has taught at colleges and studios around the Bay Area and the country,  including at UC Berkeley, City College San Francisco, Hamilton College, James Madison  University, the University of Nebraska at Lincoln, Virginia Commonwealth University, and  Slippery Rock University. She has been awarded choreographic residencies at CounterPULSE,  Djerassi, Shawl Anderson, the U Cross Foundation, Yaddo. Christy has choreographed for  several theater productions, including Bootstrap’s Arctic Requiem and Word For Word’s  Holiday Hijinx, and Lucia Berlin Stories. In 2013, Christy was a participating member of ODC  Theater’s Sandbox Series and also a mentee in CHIME Across Borders, the Margaret Jenkins  Dance Company’s cross-national CHIME (Choreographers in Mentorship Exchange) program  with mentor Tere O’Connor. In 2014, she was presented in Yerba Buena’s Bay Area Now Series  and named one of Dance Magazine’s “25 to Watch.” In 2015, she became the first woman to be  granted permission to learn and perform Daniel Nagrin’s iconic solo from 1965, Path. She  regularly hosts Wrecking sessions, based on Susan Rethorst’s model for re-imagining dance, and  she teaches her 100 Days Score worldwide. She is currently on the certification faculty of the  Laban Bartenieff Institute in New York, and she was a Fulbright Scholar, teaching and  choreographing, in Lisbon Portugal in 2019. Visit www.funschdance.org.