Meet the Artists of New Experiments 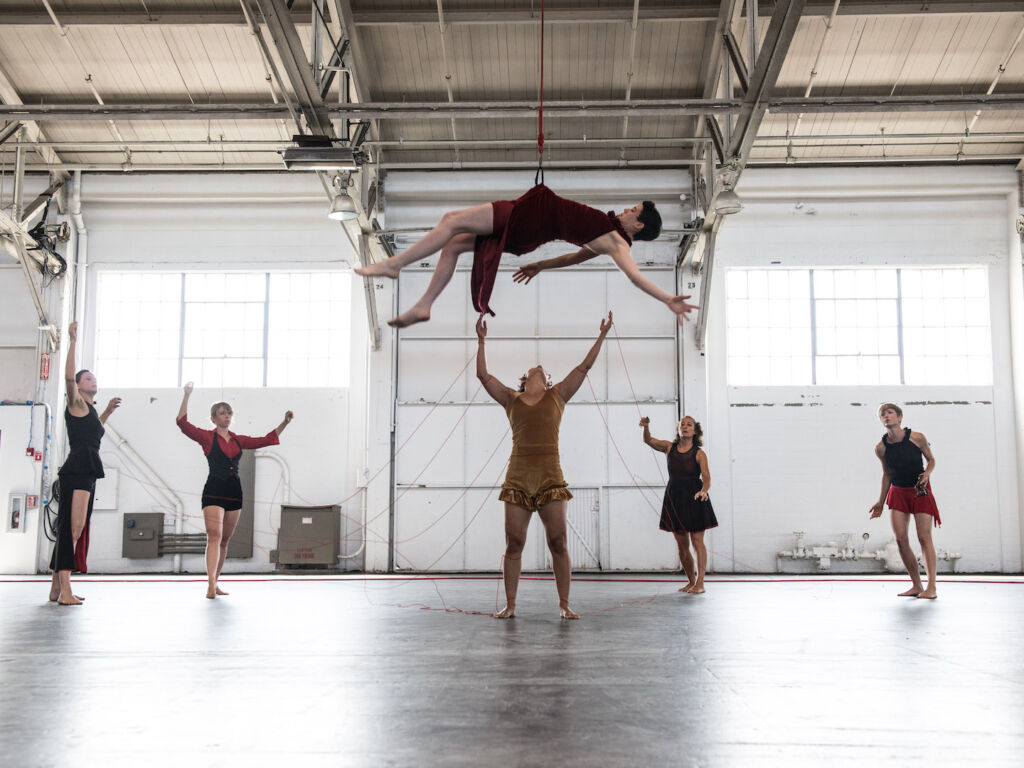 Meet the Artists of New Experiments

Founded in 2014, Zaccho Dance Theatre’s biennial San Francisco Aerial Arts Festival features internationally recognized aerial artists and exciting newcomers breaking into the field. For the 2022 festival, they are developing the New Experiments program here at CounterPulse. New Experiments is a unique opportunity for aerial artists to come together to build community, share ideas, and present new works in a mixed program on Sunday, August 21st at 7PM.

Learn more about the featured artists and the new experimental works they will be debuting on our stage.

“Grief Stones” explores grief, loss, and the experience of supporting a loved one through the dying process. Using a sound track of voicemails from the dancer’s late Mom, the piece travels through time, the grieving process, and their relationship before and after death.

Ciarra D’Onofrio (they/them) is a dancer, aerialist, and educator with a passion for using dance as a means of storytelling, social analysis, and community building. They have most recently danced with Zaccho Dance Theatre and Helen Wicks Works, and are a recent recipient of a Fact SF Fieldwork award.

Qualitative Time is an exploration of the relationship between movement and how the flow of time is perceived. This project is inspired by my mentor, Roel Seeber, whose generosity cannot be overstated. This work is dedicated to him. Thank you to Olivia Sander for all your wisdom and help in getting this project off the ground. A final thank you is owed to my parents for their unwavering support and encouragement.

Faith Elder is a Seattle-based dancer specializing in modern and vertical dance. Faith began aerial and vertical dance while attending University of Washington, performing in works by Rachael Lincoln and Roel Seeber. In the future, Faith hopes to create a vertical dance community in the Pacific Northwest and beyond.

What does it mean to transform? What is the experience of a rebirth of the self? Sometimes, we are forced to face the darkest corners of life in order to grow.
Ascension is a personal journey through the shadows of the darkest parts of the self- through death, grief, heartbreak and spiritual awakening. This act embodies the messiness of growth and rising up anew.

Kelsey Keitges is an aerial hoop artist and coach based in the Bay Area and Central Coast. Originally from Seattle, Washington, Kelsey found circus arts in 2006 after ten years of ballet training. She holds an administrative management role at the San Francisco Circus Center and performs and produces shows locally.

My piece is centered around the song Como La Cigarra which is about the resilience that oppressed peoples have in the fight for liberation.  I chose to make my piece around this song to reflect on the increasingly oppressive and restrictive laws affecting marginalized folks in the United States. The song refers to the way cicadas burrow underground and come out in the spring alive and well. This imagery made me think about how often oppressive regimes can bury us with emotions of helplessness, doubt, suffering, and grief, but we always find a way to resist by rebuilding with each other and creating hope and love for one another.

Meche is a born and raised San Franciscan, singer-songwriter, aerialist, and hoop instructor. She has trained in aerial dance since she was 12 years old with Zaccho Dance Theatre’s Artistic Director Joanna Haigood and is an alumna member of the Zaccho Youth Company. She has collaborated with and performed for Flyaway Productions, Youth Circus Center Festival, and BAYCAT. Over the years, Meche has contributed her songwriting, singing, and acting talents to Zaccho performances. She loves making pieces, primarily about social justice issues that she is passionate about.

New Wanderings explores novel avenues for me in aerial arts. I’ve seldom worked on solo pieces or pieces on the lyra, so I used this piece to expand my aerial comfort zone. The piece also reflects the inflection point I’m at in my life moving across coasts, away from college, and into territory that is at once familiar and also all new.

Meléa Emunah (she/her) grew up in West Marin and began aerial dancing when she was eight. She joined Zaccho Youth Company in high school and had the privilege to perform in the 2016 and 2018 SF Aerial Arts Festival. While in college at Princeton, Meléa co-founded the student-led Princeton Aerial Arts Club.

Nina Sawant is a circus artist, choreographer, and costume designer in Oakland, California. She has been inspiring audiences for more than 16 years with her evocative performances and imaginative costumes. Nina is a founding member of The Dahlias, a woman of color led circus ensemble, and performs locally for Vespertine Circus, Sweet Can Productions, Zaccho Dance Theatre, and Misfit Cabaret