Keepin’ it Real…down in the TL 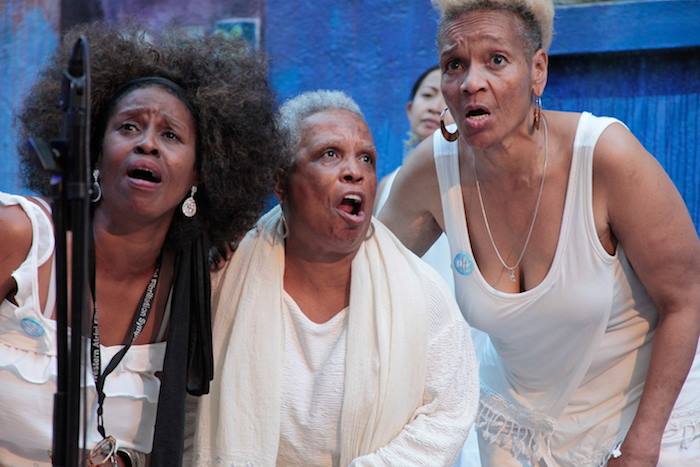 Keepin’ it Real…down in the TL

**NOTE: The names of individuals in this post have been changed for confidentiality.

It all started with having one another’s backs.

I got your back.

Whose got your back?

I GOT YOUR BACK.

We said, we sung, we danced and we meant it.

This past year, Skywatchers focused on talking about the people, places, forces, or things that support us.

“Ain’t no one got my back but myself.”

Michelle stated: “chair’s got my back”. We all giggled, and loved it. Sometimes you just gotta keep it real.

But from here, the conversation evolved into how people’s experiences often don’t get seen, acknowledged, validated —particularly in marginalized communities.

The myth of Cassandra came into the room, as we shared too many stories of folks not being seen, heard or believed by those closest to them. Most of our resident Skywatcher ensemble have health, sanitary and safety issues that they report, to supportive housing officials, and other representatives, again and again. Often with no response or change from within the system. It’s a grinding daily reality to not have basic needs met.

And from here arose the reality and statement: It feels like we’re still on the ship.

It rang too true for folks that while no longer on the literal “slave ship”, their daily lived realities feel like a modern day version of—being held back, held down—by the chains of systemic slavery.

Working with this potent theme in the current Skywatchers show “I Got a Truth to Tell”, we’ve been telling these stories, but also seeking a better future.

We’ve dreamed up our pasts to consider our futures, as Jose introduces ideas of Afro-futurism for visioning.

What is a world that could exist if we were truly able to dismantle the slave ship?

We see that none of us have truly disembarked from this ship, and we know that all of our liberation is interdependent.

We thought perhaps the best folks to ask about future vision would be our young people.

What will it look like when you get off the ship?

When your community gets off the ship?

When I presented these prompts for writing and discussion with young people and staff at our Skywatchers Youth Program site we got into REAL TALK.

For many folks living and working in the TL [or in the world, as a black or brown person] there never has been an end in sight, and there most certainly doesn’t seem to be one now.

Sandra, a young woman with two young children, responded to the questions above:

“Those questions make me very uncomfortable. Why? Because I’m a realist. I don’t even think about it. I don’t want to think about it, because it’s never gonna happen. I have a son. And he’s experienced it already. Every day he does, at school.”

Sandra went on to describe the bullying her son (black) received from little white boy at school, about which the school did nothing, until her son finally responded by pushing back. She was called in to the school to discuss her child’s anger issues and to interrogate her about their home life, what she is teaching her son, and it got worse.

As the conversation continued, Sandra’s friend Tanya began describing a similar story outline, with an even worse outcome. Her son, also black, was being bullied at school. When he fought back, the school sent Child Protective Services (CPS) to her house.

Both mothers are single. Both mothers work hard to maintain a good home, with strong standards, healthy, clean environments and to provide positive feedback, encouragement and support for their sons. Both of them worry daily about their sons and how they will be treated in the world. Both of them are active and supportive parents in their school, and both of them have experienced their sons receiving anything but the support and protection any parent would expect from the school environment for their young children. Instead, they have found themselves and their homes under scrutiny, after their sons stood up to the bullying they encountered. In both cases the bullies and their parents received no reprimand for their behavior.

This was just one of the conversations we had, revealing that imagining a future not founded on the bedrock of racism feels impossible and unrealistic, even enraging for these young women.

A young man and poet in the group, who chose the pen name Blackie, wrote this response:

It all began with the Atlantic,

We came on ships, black and white.

The Nina, the Pinta and the Santa Maria,

Everyone had made fun of Cristobal Colon,

except the Empress Isabella.

They finally financed the voyage in 1492.

Just after they finally expelled those wretched moor after 800 years.

Someone came up with the great idea, of putting black moors in the bowels of the ship, instead of on deck.

The rest is history.

As we continue development of “I Got A Truth to Tell”,  Anne weaves together the true tales and daily health hazards of living in the TL, as told by our Skywatcher ensemble. Shakiri brings in Yemaya and her fierce, maternal protector energy, to rise us above the daily mundane and into the realms of spirit and mythology. And we keep fanning the sails to find the potential futures in the here and now.

And while the lyrics go on to spit out the truth of living conditions for the poor– mold, cockroaches, lead contaminated water–the ensemble do a song and dance together in a spirit of sister/brotherhood and dry humor that busts out at the seams into a raucous and exhilarating experience.

“Down in the TL, between Leavenworth and Hyde,

That’s where you’ll find me, where life and death collide…”

This building together, this truth telling, and this creative turn around…maybe that’s the lifeboat we are creating? Perhaps with enough hard work, plus the creative transformation of these realities—our little crew can get off the ship onto the lifeboat, and row ourselves ashore.

Or better yet, if Yemaya is really with us, perhaps she’ll be shepherding the life boat, across the moat of racist terror and into the land of truth and humanity.

Though it may be impossible to dream of any dramatic change for the better where systemic racism and oppression are concerned in this America —we can do it on the daily in our work, in our personal acts of creation and community building, community assertion, community truth-telling, committing to community.