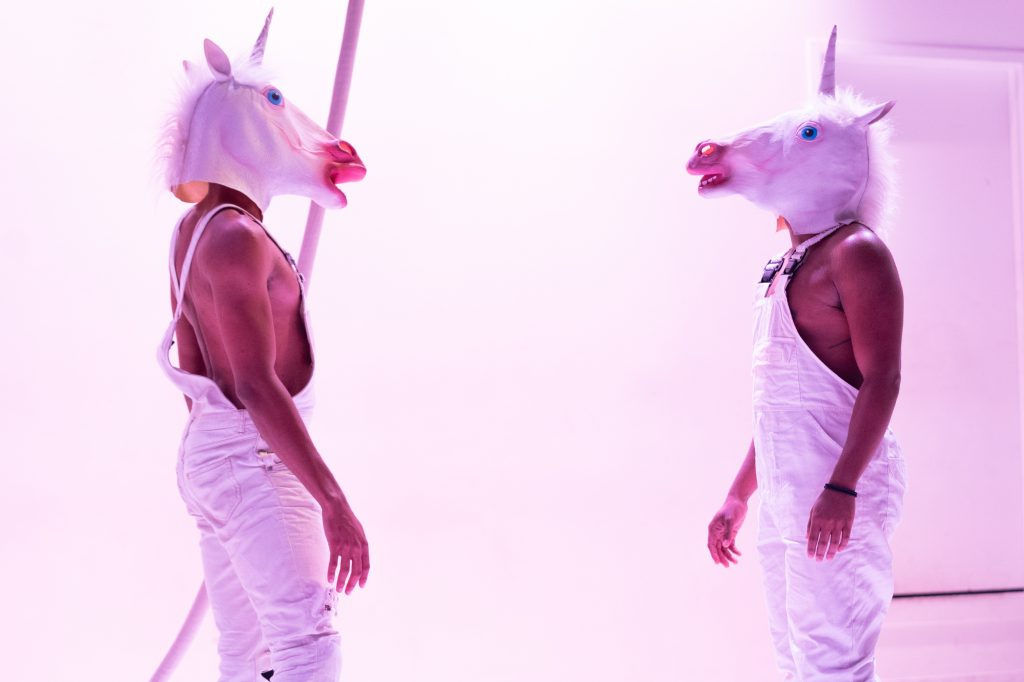 So CounterPulse is centering their second annual festival around improvisation and the pursuit of “freedom,” and this… is just a very real workout for all of me: brain, bod, heart, etc. I think it’s a bold move on our part. And I say: thank goodness for bold moves.

Years ago, I used to co-teach a kind of ever-evolving, ultimately impossible pedagogy—with my sister Larry Arrington—that we called Freedom Practice. We were two young white, at-least-partially-euro-contemporary bred dance artists who decided to jump into the belly of a very problematic beast, and try to make a social dance practice that would eat its own self and fail. We knew that “freedom” was too fraught, and ultimately not ours to create or destroy, but: we wanted to splash around in it, be in a big messy conversation about what it could be, and see what we could unearth. We operated with an acceptance that the riches were in the attempt, and we were committed to plopping ourselves right into that liminality and those problems.

Freedom Practice had its short and wobbly life from 2013 to 2015, and now, in 2019, I still don’t know what freedom is.. As ever the nostalgic one, I do like to look around now, notice how people are working to create new subjectivities and direct energy toward political ideas in their work, versus how I was doing this even just 4 years ago. I like to place my old questions and attempts into the constellation of how ideas of improvisation and “freedom” are persisting now, as these wily and socially-untenable phenomena that keep popping up whenever people get together under an umbrella of futurism.

The awarenesses are thick and long overdue. We know that violent histories/present times of eugenics, colonialism, and wealth inequity ensure that we are all—in our different ways—structurally quite un-free, but…is that where we stop? Do we allow for our words, feelings, and practices of freedom to be articulated by structures? CounterPulse says: nope. Not even close.

In the Bay Area, we are literally dripping in incredible legacies of people having said “nope” to their temporal conditions, insisting that we live in the future—live beyond what we’re told is available to us. So, while “freedom” may feel far away in any number of ways, CounterPulse doesn’t think that’s any reason to not dive directly into a multi-faceted consideration of freedom, and what that might illuminate or interrogate for our communities right here, right now. Thus, To Be Free: CounterPulse Festival 2019.

The festival blasts open next Wednesday, March 13th, with an opening party, calling in the art, the folks, the ideas, and the energies of the five days to come. The opening party will also double as the opening reception—co-created with ArtSpan—for the installation of visual and video works in our communal spaces, by Brea Weinreb. Brea’s show, when you lay your body on mine, is something that I’ve loved seeing make its way into CounterPulse. The work itself is thinking through “the intellectual, sexual, and cosmic connections that exist between the living, breathing bodies of those in [their] community, and of the LGBT artists, activists, and thinkers who died before our time.” For me, there has been a warm and spiritual presence in having Brea’s work holding our walls/stories/bodies in place here. I feel located by looking at it and thinking about what it’s doing, like being wrapped in a story with roots that are partially mine. It makes me breathe.

Wednesday night through Friday nights on the CounterPulse Main Stage and in the Project Space, there are three incisive, terrifying, and ultimately gorgeous works to see and consider.

On Thursday and Friday nights on the Main Stage, Monique Jenkinson (aka Fauxnique) and Mica Sigourney (aka VivvyAnne ForeverMORE!) will present QUEENT. Oh boy, ya’ll. QUEENT is a brilliant, slippery, hysterical daydream (nightdream?) about what happens when two drag queens deal with their bodies (and each other’s bodies) in ways that, well…in ways that we just aren’t expecting. Expectations of scripted bodies are literally shredded by Fauxnique and Vivvy, who are sickly impeccable performers. This work, for me, vacillates almost deliriously between witty and raw, and the weird fragility of the exchange makes you kind of need to puke: you’re laughing hard at the same time that your eyes are welling up and your stomach is coming into your chest from the utterly outrageous tenderness of the thing. The realness is pretty much devastating.

On Wednesday at 8pm and Friday at 6:30pm, also on the Main Stage, Alif is for An(n)als is happening. I mean, the description offered by the artists jose e abad, Zulfikar Ali Bhutto/Faluda Islam, and Gabriel Christian reads:

A queer revolution far off in the Muslim world finally overthrows Western imperialism and colonial settler projects. The U.S. becomes gripped in its own revolutionary project and the world is consumed in the greatest shift in consciousness ever witnessed. But what happens when the revolutions are over and we have inherited a toxic world?

Jose Abad in Alif is for An(n)als. Photo by Deirdre Visser

I am maybe trembling just a tad as I write this because this…this is the magical realism, the afrosurrealism, the queer futurity, the delirium, the fight, the fantasy, the new narrative. Gabriel, jose, and Zulfi know the ways that we’re not free and they know why. They collage their/our dreams and nightmares into a multi-disciplinary performance that gives us all time and space to go way down the rabbit hole of just what the widespread implications of our systems actually are, what they might be next, and how our only way to survive it all will be to push in basically all directions with our words, our bodies, and our most vicious and far fetching imaginations. Freedom ain’t free, ya’ll.

On Thursday from 6pm to 8pm, downstairs in the Project Space, Jess Curtis/Gravity Inc. (in this case, an international group of physically and mobily diverse collaborators) will create a durational and multi-sensory performance installation, Dancing in the Dark: Excerpts from (In)Visible. Stay loose, come on in, leave when you please, and get scrambled and re-grounded by this fully unique invitation into inhabiting your body in ways that are probably outside of your norm. These artists have sharp experiential wisdom about the assumptions that we make with our senses, and this journey invites you to deeply consider the constructs of your own physicality…and what could completely change, simply by walking through the door and into Dancing in the Dark.

On Saturday, we’re goin’ to church, ya’ll! In multiple ways, really. First, at 5pm at Grace Cathedral, Second Storm will feature inkBoat and members of the Rova Saxophone Quartet, improvising with each other, with the spirit and architecture of Grace Cathedral, and with themes of “home;” its absence, presence, and how it can manifest as identity, culture, or even just through a sense of place. This gathering of listening and responding artists is pretty certain to bring you into any number of complex and personal considerations of your own relationship impulse, oppression, change, and any number of other elements swirling up in our week-long meditation on freedom and the radical act of truly improvising our own lives.

Following our time at Grace, (and just to keep things properly ethereal) at 6pm we’re gathering at Moe Green’s, CounterPulse’s fave neighborhood dispensary, for a little pre-show gathering and “elevating” of spirits. There will be discounts on product and some demos for inspiration, and THEN…at 7:30pm on the CounterPulse Main Stage, creative technology and dance wizards Kinetech Arts join forces with award-winning cellist Joshua McClain in Echo Chambers: High Art at CounterPulse. You better believe they’re gonna bathe us all in a big, dreamy, and expansive composition of kinesthetically abstract choreography, utterly obtuse and drippy-pretty video projections, and the soul channel of Joshua’s cello over and under and through all of it.

And yes, of course we’re going to flow directly from Echo Chambers into our T.V.O.D. all night dance party. T.V.O.D. is an experimental dance music DJ collective with roots in some of the Bay’s most future-minded political movements. Go fuel up and come back for the perfect relentlessness of the beat from midnight to 6am, in both our Main Stage and the Project Space downstairs. Maybe we all kind of decide that for just a while, we can let the whirl and twirl and beauty equal free. A complicated proposal for sure, but…there it is.

Sunday always comes after Saturday, I guess. As two final offerings into imagining how improvisation and freedom can be considered, we’ll be hosting the Amerta Movement Mini-Symposium: Ritual ~ Performance ~ Daily Life. Based on the theoretical and practice-based work of Javanese movement artist Suprapto Suryadamo, the Amerta studies draw on Buddhist roots, eco-somatics, and a consideration of the moving body as a sensing, perceiving, and diagnosing entity. Through workshops and practices from 1pm to 3pm and then showings and discussions from 3:30 to 5pm, participants will engage with national and international practitioners to ultimately re-integrate the body back into its role as a true element of the environment that it exists in. This work absolutely lands in the crosshairs of perhaps our most sprawling contemporary questions about freedom, impulse, purpose, and constraint. To call the ultra-subjectivity of the body into question is nothing short of radical, but Amerta Movement does that squarely, suggesting that our path to freedom is to de-exceptionalize our human bodies, and place their importance solely in relationship to the things and places that they share time and space with. There’s a softening and a surrender that needs to happen for so so many of us, and this could be your place to start. The Amerta Movement Mini-Symposium feels, to me, like a crystal clear invitation to get out of my own damn way. So, I’m in.

Finally, at 5:30pm, also on the CounterPulse Main Stage, Sally Dean and the workshop participants from her Somatic Costumes into Improvisation and Performance workshop will offer a free showing of their research and practice. The outrageous and sublime experience of how costumes can revolutionize how we move, posture, and contextualize our bodies and selves has got to one of the purest practices of imaging another way. The fashion and function of what we wear and how it affects our sociologies and kinesthesiologies has always been a major cultural study, but there’s something specifically finalizing about how lush of a role the imagination plays in Sally Dean’s work, and the fact that this showing will be the last official event of To Be Free: CounterPulse Festival 2019.

From connecting erotically to our dreamiest ancestors, to composing Muslim-centric fantasies about a post-revolutionary toxic world, to experiencing our drags falling apart, to getting high as f*** in the name of multidisciplinary techno-dance art, to getting over ourselves through post-humanist movement practices, to strapping a massive piece of purple plastic to our heads and feeling it blissfully knock us over and out of our usual selves. We will try all the things, the tonics, the practices. Together we will listen and watch and get rocked and dance back and toke up and discuss around, in and out. We will participate, tilling this strange and sickly soil of freedom.

Freedom as it has existed and not existed up to now–might not yet be what nearly any of us need it to be, but CounterPulse says: that’s what art is for, so….okay.

See you at the festival.

See full program and get tickets at counterpulse.org/tobefree. Jesse Hewit is the Special Projects Manager at CounterPulse.

Feature photo: Gabriel Christian (left) and Jose E. Abad perform “Alif Is for A(n)nals”, performed as part of Beyond Gravity at CounterPulse.