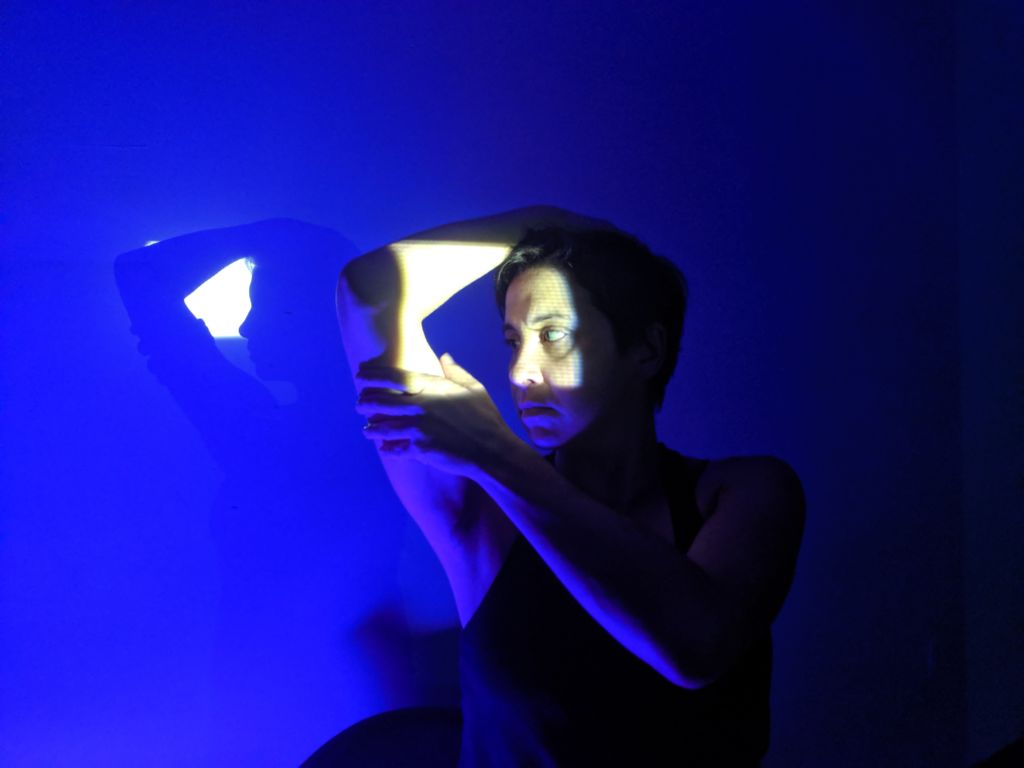 The first day I stepped into Mugwumpin’s brainstorming session for The Looking Glass Self I had no idea what to expect. As Mugwumpin’s summer intern, I’ve been in the Project Space with Mugwumpin during their Combustible Residency rehearsals for 4 months now. I’ve worked as an Assistant Stage Manager, I’ve stood in as a practice audience participant, and I’ve gotten the opportunity to brainstorm with the artists and be a part of the creative process.

I am interested in the process Mugwumpin uses to turn complex concepts such as “technology’s influence on truth and lies” into visceral physical expressions that the audience will understand. (Natalie wanted me to add that audience “understanding” isn’t necessarily the goal, but more on that later.) The process of creating a show as a collective from the ground up is very familiar to me in a dance setting, but I was unsure what the process looked like when devising original theater.

Mugwumpin started with a lot of brainstorming that generated questions. As someone who works mainly through movement I was unsure how these questions would physically take form or even begin to create something tangible that would later become a show. Yet once the giant brainstorm shifted to work with bodies and cameras and projections in space, I could see the makings of a show taking form. Everyone explored ideas fully and boldly to create small pieces that can be built into larger pieces, in time.

The company of artists that are creating together do so from a heavily research-influenced perspective. So many complex ideas are exchanged and explained so that everyone can create work around the ideas to the best of their abilities. It was unique to me how in tune everyone was with what was going on in the room, even if not everyone could be present at each rehearsal, especially without a concrete script to go off of.

This week I got to see how projection mapping and choreography can be developed simultaneously. Natalie and Stevie were creating a movement score based on the tedious hand and eye movements that we do with our screens, but the tiny movements didn’t have much of an impact. We decided to add projected screens over their bodies, which is quite complicated and takes a lot of time to build. Making a white box appear in a specific place means standing, adjusting, measuring, double and triple checking, and that’s not including the process of developing specific choreography and interaction with the projections. Where, when and how this section will take place in the show is still unclear, yet certain elements needed to be set in order to work efficiently. I stood in to measure where bodies needed to be, I got behind the computer to help and I learned how to do some projection mapping so that Wolfgang could be a body onstage. Back and forth between computer, body, wall and images projected in space, we created the projection mapping choreography together.

Although Natalie is the Artistic Director of the company, she does not lead every rehearsal. Sometimes, a technical element is developed and the performers focus on working with technology. Sometimes, like this week, an idea begins with choreography and becomes a design/tech/choreo hybrid. Other times, new text or research is brought to the table, plans change, and a flurry of inspiration is the force leading that night’s rehearsal. Mugwumpin is not just collaborating with each other, they are collaborating with big ideas, deep questions, space and technology.

The ability for everyone in the room to lead and share ideas no matter the discipline really shows that there is no hierarchy in the way Mugwumpin works to devise, and that made me feel welcome to share and learn as well. I don’t know what the final show is going to look or feel like, but I know it was made with integrity, and I was a part of it, and I’m excited to see what’s next.

Saharla Vetsch is a dance major at the University of San Francisco, a student of director Natalie Greene, and Mugwumpin’s summer intern.