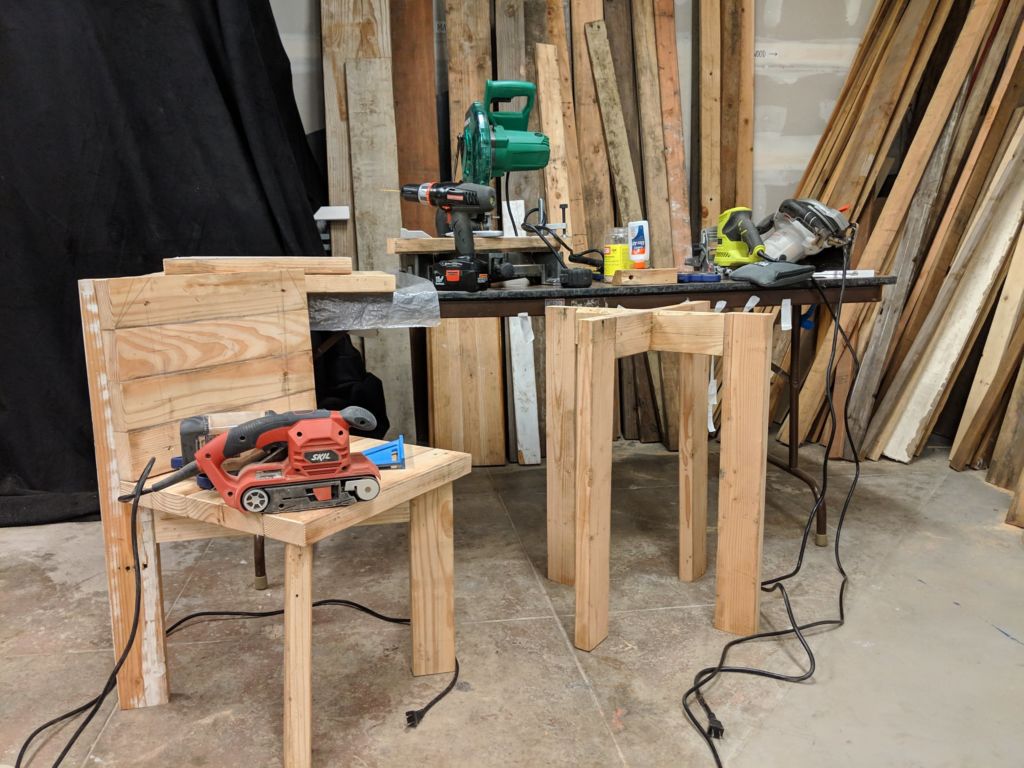 What is the body’s relationship to furniture, to structure, to the design we inhabit but rarely have an opportunity to adapt? How can design be appropriated to be more collaborative in creation and destruction, shaped by our social norms and urban conditions? Can design be improvisational, performative even? What happens when humans are no longer the subject and objects embody new life? How can our bodies respond to architectural cues and prototype new designs?

Jeremy Edwards came to CounterPulse with a vision to activate our alcove with furniture. These modular objects—currently being constructed in CounterPulse’s Project Space—will be able to shift dimension depending on user interaction. Just as CounterPulse is a platform for performance, Jeremy Edwards extends our interface for improvisation to our Tenderloin neighbors. In a neighborhood where public seating is contested and respite is competitive, Jeremy is making a bold statement with his work.

CounterPulse staff sat down with Jeremy in his temporary studio (the Project Space) to learn more about his practice and social impetus, and discovered fascinating parallels between CounterPulse’s work and Jeremy’s.

Jeremy Edwards: I came across CounterPulse’s website and noticed that you were talking about doing community projects and not just dance. I read about your interest in neighborhood work and I so I called Julie (Phelps). I wasn’t expecting any sort of project just to ask if she had any ideas. And she said, well, come and meet Rick (Darnell) next week. And it went on from there.

I don’t specialize in furniture but I went to an art school in Brighton. It was a big art school, all kinds of disciplines. Sculpture, printing, metalwork, jewelry…and I was involved in a department that was more art based; they dealt with wood, metal, ceramics, and plastics. And within that department you could do whatever you wanted. And I was into making sculptural furniture, these big, not very practical pieces that I used to express ideas about space.

Jesse Hewit: It’s really interesting to hear you interrogate furniture and how it sits in space and how the body works in utility with architecture. It reminds me of Giacomo Castagnola, who was commissioned with YBCA to make pieces in relation to a big space, and was also interested in how people interact with furniture in a public space. And YBCA commissioned 7 choreographers, myself included, to make dance projects with Giacomo’s pieces, and I got to work with him in this language of the body and the negative/positive space and what our impulses are when we see the shape of something. And his pieces were sitting in the backshop at YBCA with nothing happening to them, and these other local choreographers who have seen the show said, “can I have these pieces because I’m doing a work at CounterPulse?” This was Lauren Simpson.”

So these pieces made their rounds among all these different choreographers and venues in San Francisco for 3 years.

Still No. 8 by Simpson/Stulberg Collaborations as part of Edge Residency 2018. Set piece by Giacomo Castagnola. Photo by Robbie Sweeny.

Jeremy: Wow. It’s funny because I’ve never heard of mixing dancing and furniture in Europe. They equate furniture with design and not with dance and theatre. It’s a different mindset. When Julie suggested that we do this kind of thing, it never occurred to me.

Jesse: It’s so incredibly interesting because it brings up all these conversations about how we’re obsessed with humanism and how we think that human bodies are the only things with spirits. And then you take an object to make that the subject, and the human becomes the object. So it flips the script about humans always being the subject of everything, which is a real political problem.

Jeremy: What I find interesting in this project is the social aspect. Design pieces can be elitist and inaccessible for a lot of people. What I’m interested in is crossing a boundary and making furniture that relates to people and how people interact with urban furniture. So what I hope to do as the designer is not what we would expect from urban furniture, and I like that. I would like people to look at an object and go “What is that?” I would like want people to change the design.

Jesse: Take what they want.

Rick Darnell:  It’ll be interesting to see how people respond to it. If you look down the street, there aren’t a lot of areas of respite because of a stigma against the homeless. But we’ve got to let people sit. It’s so dehumanizing.

Jeremy: This furniture for CounterPulse is not precious and that’s purposefully intended. I would like people to sit on it. It’s almost like archetypal shapes. I would like it to be heavy so people can’t remove it from the street. I would like it to be modular so it can be moved around and have different formations. I would like it to seem valuable even though it’s made of cheap wood. I like the paradox of cheap and gold. So I’m painting them all gold. And it’s not a complicated thing at all, it’s straightforward and accessible to people.

A few chairs in the Project Space

Seth Meisler: Has your work ever been in a theatre before?

Rick:  There’s a real theatricality to it, on the basis of them being able to roll around in the environment. It’s site-specific but also could be anywhere.

Jeremy:  I used to make furniture and just put it out on the street and let them go.  This project is more about CounterPulse and the stage and theatrics. These pieces aren’t final finished designs by Jeremy Edwards. They’re co-designed by the people that use them—that’s the idea.

Jesse: What’s exciting about this is that there’s finally a set of objects without a prescription for how to use them. A lot of people in this neighborhood, everything that’s given to them by social services has to be done in a very particular way. How they’re supposed to use it. With this project, there’s no user instruction. It makes me wish you wish that you could just install a little camera and watch the project move beyond the context within which it was designed.

Jeremy: I like the idea of people questioning how they can change this thing. I think design and architecture needs to be provoked a little bit.

Rick:  It also shows that we all have something in common. We all need a place to sit and eat, whether it’s milk crate or a couch.

Jeremy: And it’s great skill to pick up what is the essential thing in a piece of design and draw from there.

Justin Ebrahemi: I’m curious if we’ll begin to see a sense of ownership with the furniture. Will people feel like they’ll have a right to sit on these chairs, and once they do, will it become territorial? Will they share? I think just the act of bringing these simple designs and introducing them into the Tenderloin is so radical, because there aren’t areas of respite. And I think gold-plated furniture will cause a lot of excitement.

The pieces are almost complete! Next step is to paint them gold.

Jeremy: I did this project where I went and visited 9 major cities in Europe. And I went around taking photos of objects that people created in their everyday lives to fix things, like chairs held together by string! And it was then I started thinking about people finding their own solutions. And then I had an idea to go into the urban environment to make unfinished work to see how they’d use it. And one of these pieces I made was a bench using pallets, and placed in the corner of this street that was trashed with junk. And someone painted the bench white, which changed it completely. And then people started writing their names on the white paint like “meet you here at 6:30pm.” So I left my email address. And someone wrote to me: “Your bench has been damaged, can you come out and fix it?” Because this bench was here, people stopped throwing junk in this corner. The design changed people’s’ attitudes to this little part of the street.

Jeremy Edwards is completing the TenderArts Urban Furniture Residency at CounterPulse. His furniture subverts common notions around the role objects play in everyday life. He examines objects in critical inquiry of their essential functions, and how those functions can be modified with user interaction. His creations contain solutions that have yet to be discovered—solutions that broaden our view of the form and function of design. Learn more about his work at www.jeremy-edwards.com.

We’ll be celebrating Jeremy’s furniture residency at 111 Minna Gallery on Friday, May 17, 5pm-8pm. Join us for the happy hour!