Breaching Towards Other Futures 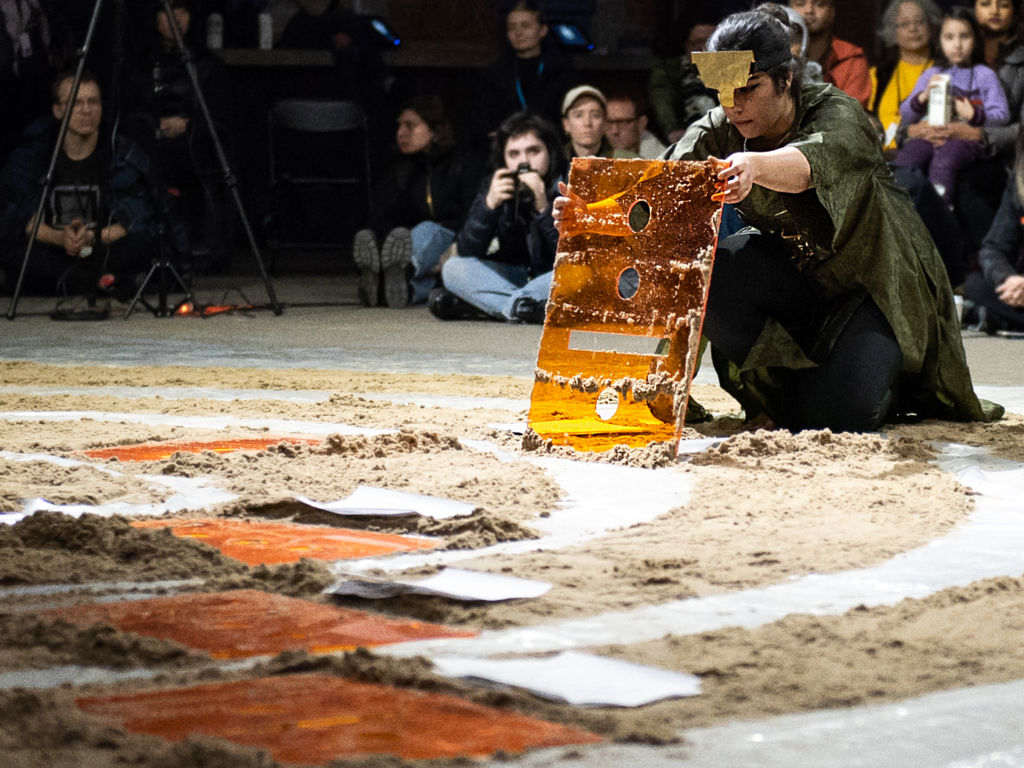 Breaching Towards Other Futures

On January 25th 2020, Lahore⁠—Pakistan’s self proclaimed ‘cultural capital’⁠—launched its second art biennale in multiple venues throughout this historic city, from 16th century forts and bath houses to contemporary museums and public parks. The theme this year: Between the Sun and the Moon is an ode to Muslim sciences that once thrived here, in particular, astrology a celebrated aspect of Islamic civilization, looking towards the stars in search of answers.

What about the earth? What knowledge can be found looking down at the shifting sands of time? “Ibn-e-Khaldun – a renowned Muslim scholar – wrote about this craft as one belonging to the common person, as well as prophets and sages. When tools were not available to track the stars, people made shapes in the sand as a form of divination”, Shirin Fahimi, a Toronto based artist and researcher tells me during a recent Skype interview. She is speaking of the art of Geomancy, known in Arabic as Ilm-a-Rumal translated literally as Knowledge of the Sand. “It is the craft of precarious city dwellers”, she adds recounting her time browsing through Tehran’s bookstores, markets and multiple shrines, wherever this lost science might still be practiced.

The 16 codes of geomancy, image courtesy of Shirin Fahimi

“The European rationalist gaze into Islam has made people shy away from these practices” Fahimi laments as she tells me of her journey from the bourgeois educated North Tehran where such practices are sneered at as regressive, to the more working class South Tehran where people openly offered to guide her through the various stages of this intricate form of soothsaying. “Geomancy is still considered a noble art by some mainstream Shia scholars but there are reports every day in the newspapers of people, especially women, who are arrested for practicing Ramali – a Farsi term for a geomancer – and labelled as charlatans.”

“It goes back to this notion of the witch, the mean old, ugly figure who is the deceiver, the woman is culturally so easily tied to this idea of monstrosity” states Morehshin Allahyari a New York based artist and Fahimi’s collaborator. Allahyari’s current long term project, She Who Sees the Unknown researches figures of Islamic mythology, primarily female and gender ambiguous jinns and demons, invisible spirits that live between our world and another. Through her research she “re-figures” these forgotten and shunned monstrous creatures through digital interventions, bringing them back to life and making their stories relevant to contemporary issues such as climate change and anti-immigrant rhetoric. This synthesis of Islamic esoteric practices and technology is something that both Fahimi and Allahyari share in their practices.

The two artists met at a conference in Montreal where they were both eager to share their research with one another, it was this that led to their collaboration, a performance titled Breaching Towards Other Futures that will open at CounterPulse in San Francisco on Friday February 7.  “In my practice” Allahyari continues, “I love to use elements of stories that can speak to our contemporary times, as well as our future. Connecting them to personal stories, I’ve narrowed my research to focus on five figures”. One of them is Aisha Qandisha, a fearsome female jinn known as the opener, Allahyari explains that “she has the power to possess people cracking their bodies and they become a traffic zone for other jinn and demons”. Fahimi adds that the focus of geomancy is a process of opening a series of 16 doors that relate to 16 different shapes that in turn orient the practitioner towards multiple possibilities of the past, present and as is particularly relevant to this piece, the future.

Breaching is a common theme in both Allahyari’s and Fahimi’s work, from gazing at fissures in the sand to opening doors and splitting bodies to serve as mediators of possibility. Most importantly, breaching is not a passive act, it is an active moment, a breaking through, pulling down walls of ignorance and forcing open multiple possibilities, past, present and future. This performance is especially important in today’s world where environmental catastrophe is being exacerbated by right wing governments. Fascist policies are being implemented that are literally walling in and walling out the world’s most marginalized – from Trump’s Muslim ban, to Modi’s internet shutdown in Kashmir and bigoted citizenship bill and the most recent Netenyahu-Trump apartheid plan in occupied Palestine.

This piece is inspired also by deeply personal experiences with global barriers to movement. Both artists are from Iran and have faced frustrating restrictions since the travel ban was implemented in January 2017. Fahimi, a Canadian resident applied for an American tourist visa shortly after and was rejected, “I knew it was going to be rejected,” she recalls, “before I applied I woke up before sunrise and practiced rituals I had learnt and the reading was quite close to the outcome.” When visiting Middlesbrough a city with the highest number of refugees in England, Fahimi found herself in a place that was also deeply prejudiced and resistant to asylum seekers. She found herself lost, disoriented in a way that is particular to the immigrant experience. Fahimi used geomancy to re-read Middlesbrough’s map, re-orienting herself and finding pathways that might not be otherwise legible in a top down view of a complex urban center.

Video still from ‘Aisha Qandisha’ by Morehshin Allahyari and part of the series She Who Sees the Unknown, 2019

Briefly going back to the Lahore Bienalle, its theme is indicative of a global movement throughout the Muslim majority world and its diaspora, where the Muslim imagination and Islamic mystic practices are returning as a site of inquiry. It is worth noting that this is a largely queer and femme led investigation that includes artists such as North Carolina based Saba Taj and her series Creatures From the Earth, Helsinki based Abdullah Qureshi and his project, Mythological Migrations and many more, including Morehshin and Shirin’s own practices. There is a surge in research into talismans, numerology, jinn, alchemy and scriptural references to the unseen. In my own practice I have been looking at ideas around death and martyrdom through Islamic mysticism. I see it as a rebellion against Euro-centric concepts and demands for legibility, it is a re-owning of histories and ideas that are definitely not perfect – patriarchy finds its way into everything – but provide another way of seeing the world.

As we discuss what possibilities these investigations may offer, the specter of orientalism with its tropes, archetypes and prejudices hovers above us. We discuss without resolution how we as artists can avoid being orientalised, how do we resist over-explaining work that comes from very specific cultural references, what are our access points and who do we create our work for? Allahyari interrupts the clamor of self doubt, “I think the whole kind of framework of orientalism is a blessing and a curse: It has given us the space to have a good kind of criticality but it has also made the idea and eye of the outsider so much more important. At some point you’ve got to do what you’ve got to do, instead of constantly worrying about controlling these spaces. Eventually I had to give up being upset about the intervening western gaze.” Self criticality is still important to Allahyari, it is very much possible to fall into orientalist stereotypes but learning from these errors is equally important. “We must give ourselves the space to make mistakes,” she continues, “we have to constantly question what we are doing, this is our burden.”

Respect is also crucial, fully embracing the practices and figures they have researched outside of cold anthropological methodologies that have done more of a disservice to these histories, misinterpreting important texts and pushing them further into the shadows of obscure superstition. Fahimi and Allahyari have also made their research accessible to folks from South Asia, South West Asia and North Africa, something they see as a form of decolonization. This is most clearly manifested in Allahyari’s travelling Reading Room or MaktabKhaneh and a living online archive.

Breaching Towards Other Futures does not require audience members to be well versed in ancient sciences, astrology or the occult. It is a performance that asks you to be present, to witness. It is an invitation for surrender, to join Morehshin Allahyari and Shirin Fahimi as they breach barriers and lead you into endless possibilities.

Breaching Towards Other Futures shows at CounterPulse for one night only, on Friday February 7 at 7:00pm. This performance is made in partnership with Southern Exposure’s current exhibition Where do you want ghosts to reside? curated by Azin Seraj and Zulfikar Ali Bhutto. The exhibition will be on view till March 14 2020.

Shirin Fahimi was denied entry into the United States on February 4, 2020. We are committed to continuing with the performance as an act of solidarity and resilience. She will be virtually present.