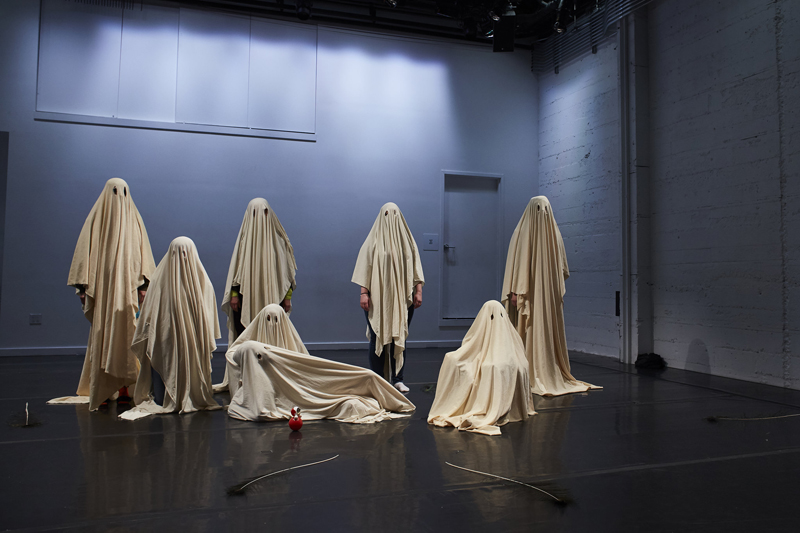 An excerpt from Jesse Hewit’s piece on Upstanding Others as part of the 2018 CounterPulse Festival. Originally published on SFMOMA’s Open Space. Read the full piece here.

The premise:
Upstanding Others was an experiment that happened within the inaugural CounterPulse Festival, and it happened from March 12 through March 17, 2018. There were eight to ten people in a room (or series of rooms) every day for a chunk of hours, some chunks larger than others. Olga, Sasha, and Nina were “from Russia,” Saulaman and Megan were “from US swing states,” and Tara, Jose, and Zulficar were “local.” Nastya, who is a curator “from Russia,” was often in the room, as was I. These places that we are supposedly “from” provoked our being brought together, and it was implied that conversation or collision or bridging would happen because of these places. But people mostly didn’t care. Other things happened, and over the course of the week, I watched the other things.

On being one among others:
She was curious about the texture and look of the street. There were colors and edges that were so completely strange to her that she could not think about anything else. She tried to be really attentive in the group, but every time someone mentioned something about blue or sharp or looking, she got ignited and blurted out a question or very recent street memory. Her world was crisp and clear from the inside; it didn’t mix organically with the wash of fleshy and fast angst that was the outside, the others. These people were just too shifty. Her trust of objects always won out, so she preferred to share herself most intimately with the wall or the piece of wood lying on the table, and not move quickly at all. I zeroed in on her immediately. I too was slow and trusted the wall.

On the week:
I was with the group during four of the six days: Monday, Wednesday, Friday, and Saturday. Monday had the light of possibility; ease was in the room. Everyone agreed early on that whatever was to happen on Saturday (the culminating presentation) in front of an audience was not going to be a performance about Russia and the US. It was startlingly clear and unanimous, in fact. Various proposals of research and task revealed the interests of the artist from which they came. People with their eyes closed danced in silence with objects as others watched and manipulated the terrain and personnel around the dancer. In response to this, She said, “When you watch a person deal with an object, you see who they are.” I agreed. Later, a choreographic exercise in impulse re-direction was offered and muscled through. One in the group, who was “not a dancer,” attempted the exercise in a just-so way, a revelation for the one who offered it. Everyone was really looking, and things felt ripe. The day ended with an iPhone in a cup, the group circled around it, recording the asking of 100 questions: questions about each other, the collective, our assumptions and frames, the week, the many worlds. By the time I re-entered the group on Wednesday, something else had settled in. A number of the artists had begun, whether consciously or not, to do the thing that artists are pushed to do again and again: concern themselves almost exclusively with product. The weather of the group changed, as attention and tension were placed on “the show,” Saturday’s public engagement, where the group was to somehow present what had happened.​